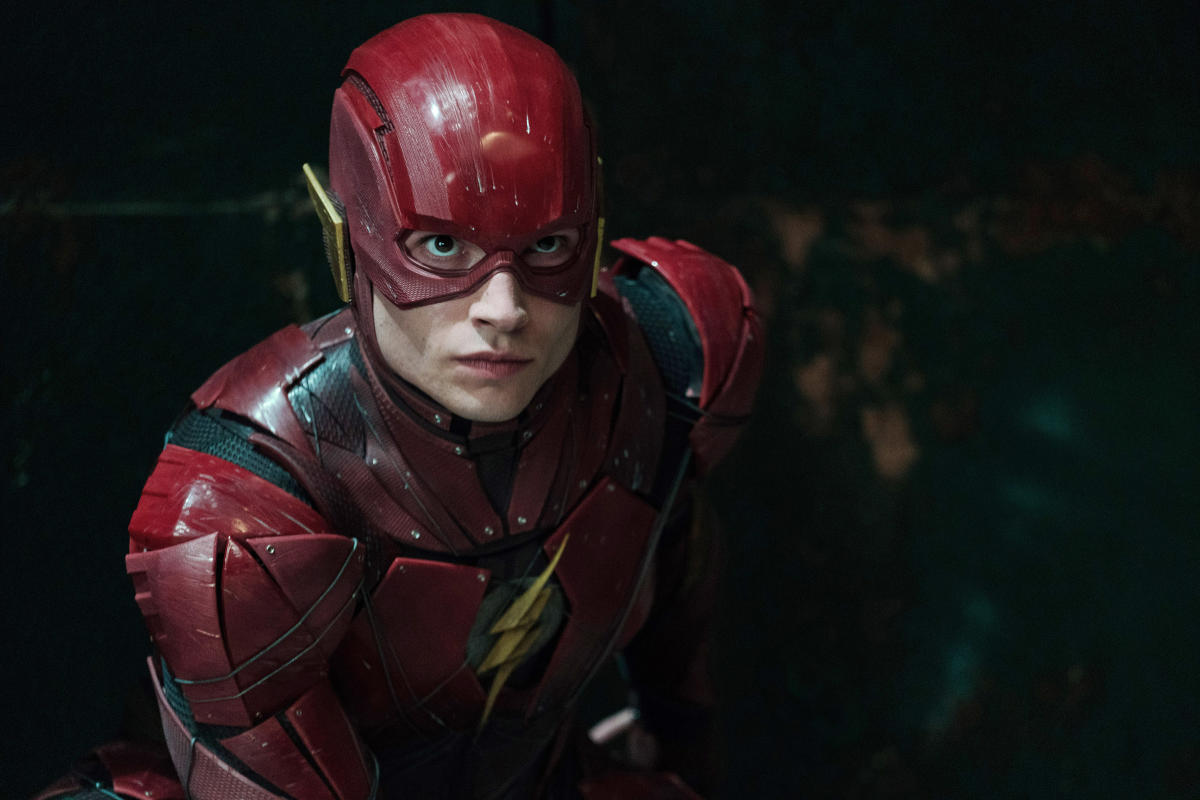 The future of The Flash — Warner Bros.’s once highly anticipated superhero actioner — is in jeopardy given star Ezra Miller’s troubling and seemingly endless pattern of run-ins with the law over the past year.

Or perhaps it isn’t: Thus far WB has not given any official indication that it plans to delay or disrupt the June 2023 release, despite the studio’s recent controversial cancellation of its nearly complete Batgirl movie.

Here’s everything you need to know about Miller’s issues and how they could ultimately spell doom for The Flash (or not).

What’s the scoop on The Flash?

Set to be the DC Extended Universe’s 14th film (not counting the director’s cut Zack Snyder’s Justice League) and ninth standalone entry (following previous adventures with the likes of Superman, Wonder Woman, Aquaman and Shazam), The Flash has had its fair share of issues prior to Miller’s behavioral issues. Previously attached directors Seth Grahame-Smith, Rick Famuyiwa and the tandem of John Francis Daley and Jonathan Goldstein all departed over creative differences before Andy Muschietti (who’s helped make WB some pretty pennies with two chapters of Stephen King’s It adaptations) took the reins in July 2019. The film’s main constant, however, has been Miller, who was cast as the lightning quick superhero Barry Allen ahead of a cameo in 2016’s Batman v Superman before a co-leading, scene-stealing turn as one of the six main characters in Justice League (2017). Miller became an instant favorite among fans for bringing some much-needed comic relief to DC’s often grim moodiness.

Written by Christina Hodson (Birds of Prey), The Flash reportedly finds Barry traveling back in time to prevent the murder of his mother (Maribel Verdú), which “brings unintended consequences to his timeline.” In other words, the film could crack open the DC multiverse in a similar vein to Marvel’s December mega-hit Spider-Man: No Way Home. Miller is said to be playing at least one other version of Barry, while Ron Livingston (replacing Billy Crudup as Barry’s dad Henry) and Kiersey Clemons (Barry’s love interest Iris) costar. The film’s also drawn plenty of buzz for including two Batmen (Michael Keaton and Ben Affleck), Superman’s nemesis General Zod (Michael Shannon) and a brand-new Supergirl (Sasha Calle).

The Flash was originally scheduled for release on June 3 of this year but the pandemic forced a year’s worth of production delays. It’s currently scheduled to open in theaters June 23, 2023.

What has Ezra Miller done wrong?

Any defendant is presumed innocent until proven guilty in the American justice system, but what’s particularly egregious in the case (or cases, we should say) of Ezra Miller is the sheer number of dicey incidents and arrests the actor (who uses the pronouns they/ them) has been involved in over the past two-plus years.

Miller first made headlines for all the wrong reasons in April 2020 when a video surfaced showing the actor choking a woman and throwing her to the ground outside a bar in Reykjavik, Iceland.

Miller’s so-called crime spree dramatically accelerated in 2022. In March, Miller was arrested and charged with disorderly conduct and harassment after a physical altercation with patrons at a Hawaii karaoke bar. Only three weeks later, they were arrested yet again in Hawaii for second-degree assault after allegedly throwing a chair that left a deep cut on a woman’s forehead.

In June, the parents of 18-year-old Standing Rock Sioux activist Tokata Iron Eyes alleged that Miller used “violence, intimidation, threat of violence, fear, paranoia, delusions and drugs” to influence their daughter, who they say began an inappropriate relationship with Miller when she was only 12, and the actor was 23.

Also in June, a Massachusetts family claimed Miller harassed and threatened them, with allegations including the actor showing up at their house wearing a bullet proof vest, brandishing a gun and uncomfortably touching a 12-year-old child. According to the mother, Miller believed the child to be a “mystical being.”

Miller has also reportedly been housing a woman and her three young children whom he put in Hawaii at his Vermont farm, where the children’s father alleges the actor keeps firearms and ammunition within dangerously close reach of the kids. (The woman has claimed the father is abusive.) Vermont’s child services department is now reportedly attempting to locate the mother and her three children.

And this week, Miller was charged with felony burglary, again in Vermont, for allegedly stealing bottles of alcohol from a private residence.

It’s all made for an alarming pattern of troubling and erratic behavior for the 29-year-old star, to say the least.

What does Batgirl have to do with it?

Warner Bros., which recently merged with Discovery, shocked Hollywood and much of the world when the studio announced earlier this month that it was canceling the planned HBO Max release of its $70 million DC Comics movie Batgirl, despite the fact that the project was almost completed. The movie was directed by duo Adil El Arbi and Bilall Fallah (Bad Boys 4 Life, Ms. Marvel), scripted by Hodson and set to star In the Heights breakout Leslie Grace in a rare Latinx-lead superhero movie. JK Simmons and Brendan Fraser were costarring, while Keaton also reprized his role as Bruce Wayne in this film.

An initial report from Variety indicated Warner Bros. Discovery pulled the plug Batgirl (as well as the animated Scooby-Doo sequel Scoob! Holiday Haunt) for tax purposes as the newly merged company’s new leadership sought to move away from a short-lived emphasis on highly budgeted HBO Max streaming titles. In a statement, the company wrote, “The decision not to release Batgirl reflects our leadership’s strategic shift as it relates to the DC universe and HBO Max.” CEO David Zaslav probably didn’t do Batgirl‘s creators any favors when it came to speculation that the film must’ve been truly bad for it to be so unceremoniously scrapped. “We’re not going to put a movie out unless we believe in it,” he said on an earnings call.

Related videos: ‘Batgirl’ star Leslie Grace thanks fans for letting her ‘take on the cape’ after film is scrapped

Regardless, Batgirl‘s cancellation was a nearly unprecedented move, and one that drew understandable heartbreak from Adil & Bilall and Grace, and support for its creators from the likes of Marvel chief Kevin Feige and directors James Gunn and Edgar Wright.

It also drew heaps of internet outrage, one of the most resounding refrains being “How can WB cancel Batgirl yet still plan to release The Flash when its lead star is seemingly being arrested on a monthly basis?”

Filmmaker and pundit on all things geek Kevin Smith echoed the most prevalent sentiments on social media. “It’s an incredibly bad look to cancel the Latina Batgirl movie,” Smith said on his YouTube series Hollywood Babble-On. “I don’t give a shit if the movie was absolute f***ing dog s*** — I guarantee you that it wasn’t… I don’t give as*** how bad the Batgirl movie is, nobody in that movie is complicated or has anything in their real life you have to market around. In the Flash movie, we all know there’s a big problem! Flash is the Reverse-Flash in real life.”

Causing further ire was The Hollywood Reporter‘s reveal Wednesday that while The Flash was largely filmed in 2021, the studio enlisted Miller for reshoots this summersomewhere in between all of their trouble with the law.

I know where it does The Flash go from here?

Now that is a $200 million question (also the tentpole’s reported budget).

As of Aug. 5, when reports emerged from Warner Bros. Discovery’s earnings call, The Flash was still on track. “We have seen The Flash, Black Adam and Shazam 2,” Zaslav said, according to Variety. “We are very excited about them. We’ve seen them. We think they are terrific and we think we can make them even better.” (Deadline has also reported the film is drawing high marks in test screenings.)

But expect the pressure on Warner Bros. to amplify with each new Miller incident (is there really an end in sight at this point?) to rethink releasing The Flashas it did after this week’s news out of Vermont.

According to The Hollywood Reporter in a piece published Thursday, the studio is now mulling over three options in light of Miller’s most recent arrest.

One, they could see to it that Miller (who THR says has been accompanied by their mother in recent days, and was photographed at her Vermont home, above) seeks professional help and gives an interview at some point explaining their erratic behavior. In this case the studio would move forward with The Flash‘s release plans, although it’s hard to imagine Miller doing much press for it, all things considered.

Two, even if Miller does not rehabilitate, Warner Bros. could still release the film — yet recast The Flash in future projects.

Or three, should Miller continue to cause mayhem, the studio could scrap the film altogether. As THR notes, with Miller in nearly every scene, reshooting the movie with another actor (a la Ridley Scott’s 2017 drama All the Money in the Worldwhich replaced disgraced supporting actor Kevin Spacey with Christopher Plummer) would be impossible.

Opinions from press members on The Flash‘s fate varies.

“I don’t see #1 happening or, if it happened, working,” tweeted THR columnist Scott Feinberg. “#2 doesn’t make sense given that they see this as an investment in a long-term franchise. Sooo… I suspect BATGIRL may be soon getting some company.”

“My completely uninformed take,” started Fangoria editor in chief Phil Noble Jr. “The dude whose terrible instincts about optics helped him shelve a 90 million dollar POC-led Batgirl movie doesn’t give as*** about Ezra Miller’s crime spree, and will release this movie like nothing happened.”

Manage Cookie Consent
To provide the best experiences, we use technologies like cookies to store and/or access device information. Consenting to these technologies will allow us to process data such as browsing behavior or unique IDs on this site. Not consenting or withdrawing consent, may adversely affect certain features and functions.
Manage options Manage services Manage vendors Read more about these purposes
View preferences
{title} {title} {title}